Modern Biotechnology in LDCs: governing innovation in India's agricultural markets - Part 2: The reality of India - poison can be sweet too!
-- An entry in Daniele Navarra's web space (in the FGB's web site) --

Modern Biotechnology in LDCs: governing innovation in India's agricultural markets - Part 2: The reality of India - poison can be sweet too!

Cruising around the mustard fields of Rajastan, discovering the enchanted rice fields of Karnataka or finding your way through the jungle in the hilly north west part of Tamil Nadu is indeed a remarkable experience. India possesses a phenomenal variety of land types and climate zones with vast farming areas surrounded at times by high mountains or flat plains, which make it virtually perfect for the adoption of large scale farming as well as boutique organic products. As it is often heard while travelling around the Subcontinent: 'Everything is possible in India!'. Nevertheless, in many of the cases your correspondent came across, production was still relatively small scale, often despite concentration of land ownership, and peasants used rather antiquated and labour intensive means of production. 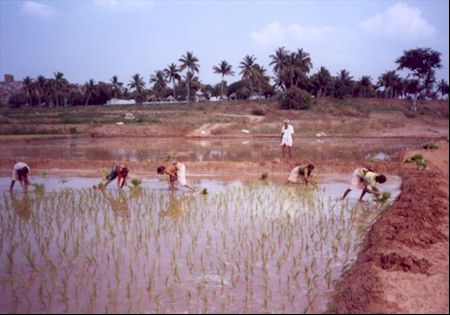 Maharshtra, Andra Pradesh, Kerala and Karantaka are the most active states in terms of both research and application of biotechnology in agriculture. Due to the presence of the high-tech hub of Bangalore, the state of Karnataka is in the most attractive position the become a leader in the field, advertising tax allowances and a low cost floor space for companies involved in genetic engineering, as well as pharmaceutical research and bio-informatics. Karnataka hosts also the Original Rice Research Station in Mandia (about 100 kilometers away from Bangalore). A noticeable presence considering that rice is India's staple food, occupies about 43 million hectares of cultivated land and accounts for over 40% of food grain production of the entire country. Unfortunately it seems that to date Golden Rice (a variety of rice grain with enhanced beta-carotene - provitamin A - nutrient contents) is not yet widely available, despite its potential to be an effective nutrients transmitter for the population at large while at the same time is considered by experts the 'number one' cultivable crop in the world.

Likewise Karnataka is also the fourth largest cotton producing state in India, which foresees fruitful prospects for the introduction of Bollgard, an innovative cotton seed variety introduced by Monsanto, which is resistant to bollworms. Bollgard involves the insertion of a gene called Bacillus thuringiensis (Bt), a naturally occurring insecticidal toxin by a soil-borne bacterium, into the germoplasm of a native specie of cotton plant. Bollworms can cause losses as high as 90% of the harvest, and until the discovery of Bt the only way to fight it would be with pesticides and chemicals. Today, cotton growers use nearly half of the pesticides of the entire agricultural sector, thus Bt could provide a more natural counter measure. At the same time both public and private research centres are investigating other alternative methods, while the various Government Departments of Agriculture are in the hectic process of training farmers in the use of bio-fertilisers.

The current overarching trend to 'push' GM seeds use in India is probably a response to the sky-rising levels of chemical fertlisers and pesticide consumtpion of the 1970s and 1980s, during the period of agricultural modernisation known as the 'Green Revolution'. The Green Revolution can be summarised as follows: Indian scientists planted genetic materials within self-pollinated high-yield seeds variety, while farmers were trained to use chemical fertilisers and massive amounts of pesticides. It was a shock for your correspondent to learn during a visit to a secluded Toda village in the Natural Reserve of the Nilgiri Hills at some 2,500 meters of altitude above the sea level, that chemical agents and pesticides were a standard practice among farmers. According to a respondent: 'Thanks to the Green Revolution food production increased and costs decreased, but today the presence of chemicals in the soil can be as much as 30 Kgs per hectare, this is high, but not as high as in Japan were it can reach up to 80 Kgs per hectare... when it is cheaper for the farmer to use chemicals instead of more innovative and less polluting methods, poison can be sweet too!'. Unfortunately, the indiscriminate use of chemical fertilisers is decreasing soil life and humus, developing nutrient imbalances in plants, polluting the water and creating a number of other environmental hazards. Thus, improving the current situation requires a coordinated effort across the board to reduce the costs for alternative methods to take over.

India is changing, but it has been for many years, and in many respects it still is, a closed market. This means that a number of local companies operate in the agricultural sector, which includes also companies in the area of animal feed, pesticides and tractors and foreign presence is limited. According to data gathered by Pray and Basant (2002) the largest Indian firms by market share and R&D expenditure are Hindustan Lever, Rollis India, United Phosphorous and Bayer India. Tata ltd should also be included being a large conglomerate whose main business is in the automobiles sector, but owns also tea plantations and factories, consulting services as well as insurance companies and beach resorts. The foreign players are Monsanto, Du Pont and Aventis, which have been investing heavily in GM research since 1998 and have established export-oriented units in agreement with the government. Estimates might not be entirely reliable, but during the 1990s the private sector spent between $39 and $43 million on food and agricultural research (Pray & Basant, 2002:35).

Sadly, looking at the conditions of the laborers the general sense of backwardness inspires sorrow, and while richer farmers owned at least one tractor, many others still used a wooden plough carried by cows or camels. The first impression is that you would not expect land owners to be aware of the existence of genetically modified seeds. Suspicion that was soon to be disproved. During a conversation with a farmer, he would complain that after buying pest resistant seeds, he would not be able to plant again the seeds from the fruit that grew thereafter without developing a Frankenstein-like hybrid plant. Quite unusually, the plant stemmed all the varieties of the original crop simultaneously. Thus, he had to buy new seeds again. Such an occurrence is known as transgenic double-cross hybrid, which means that since growers are given seeds from single-cross hybrids, as opposed to seeds of two inbred lines, these cannot be reproduced. Fear of copying from competitors and loss of sales is what worries seed suppliers, which then introduce genetic restrictions (or Genetic Use Restriction Technologies - GURTs) to reproducibility. Yet the consequences of such defensive methods for Indian (as well as other LDCs) farmers are of some importance and will be explored in more detail.